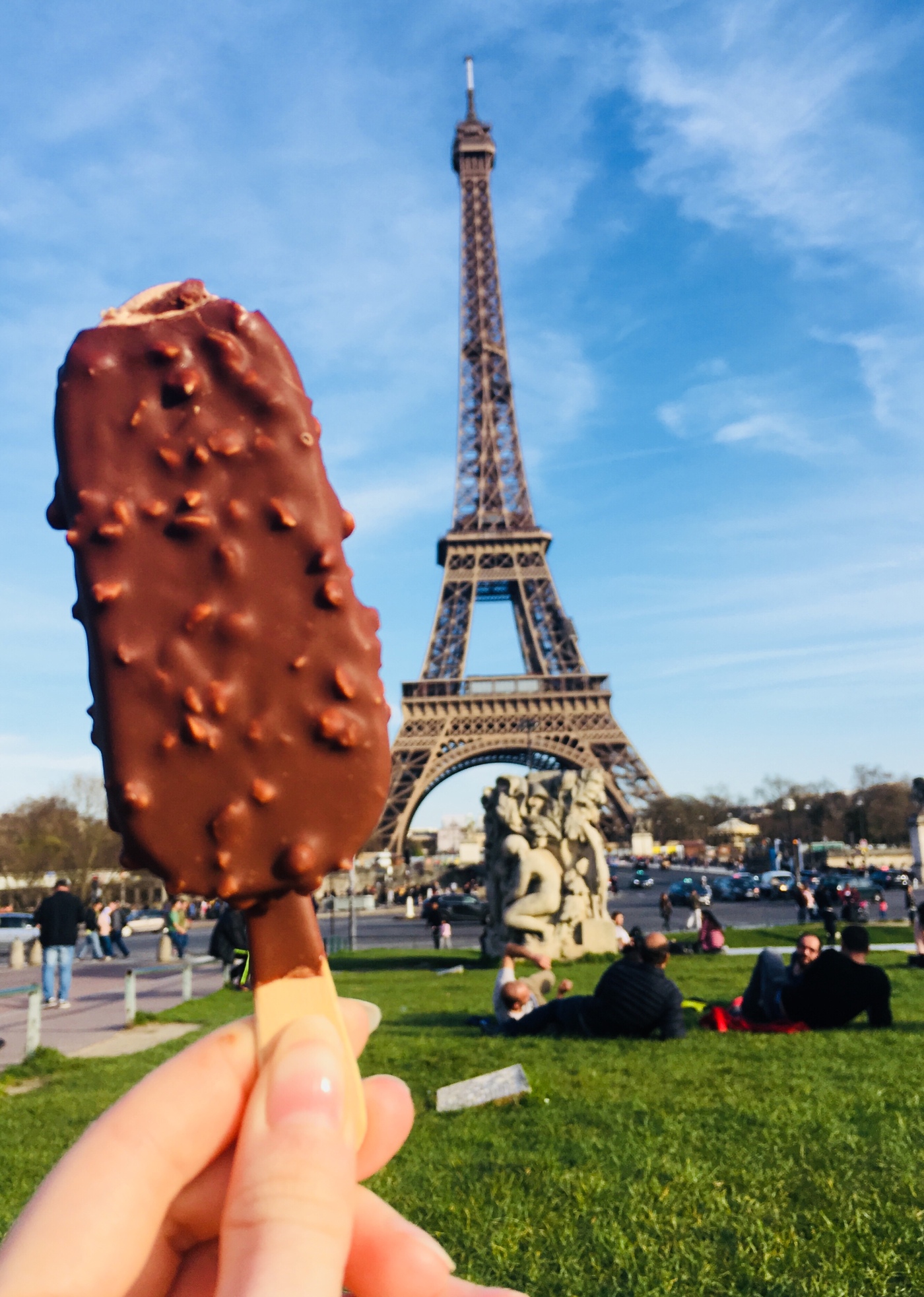 We had a little taste of summer in Paris this weekend – and let me tell you, it was delicious. Clear blue skies, glorious sunshine, 22 degree heat… what more could you ask of April?

As someone of mixed English and Irish blood, it’s pretty much written into my genetic code that in the event of so much as a solitary ray sunshine appearing any time between Easter and Halloween, you absolutely must must must Make The Most Of It.

So Make The Most Of It I did.

I started at Friday lunchtime, which was a doubly great idea, because apart from enjoying an hour of fresh air and vitamin D, it had the unexpected effect of making it feel like the weekend had already started, even through the remaining four hours spent in the office that afternoon.

Jeremy came to meet me, and we picked up the lunchtime “menu” from a little boulangerie around the corner from my office. In addition to the usual baguettes and pastries, they have a fab selection of savoury fare – sandwiches, salads, quiches, you name it – and I came away on this occasion with a folded fougasse filled with goat’s cheese and roasted Mediterranean vegetables. It was heated in the oven, which perhaps meant it wasn’t the most appropriate choice of lunch for such a warm day, but it was bloody tasty – soft bread with slightly crisp edges, absolutely stuffed full of the delicious, creamy cheese and perfectly seasoned veg, all herby and olive oil-y. All in all, no regrets were had.

I was slightly less enthused about the pastry which accompanied it. I tried a religieuse, which I’ve been meaning to do for ages.  They always look fab, like a giant profiterole with another, ordinarily-proportioned one stuck on top (Jeremy calls them “those snowman cakes” if that gives you an idea), usually with a thin disc of chocolate or a circle of icing stuff separating the two components. They’re most commonly chocolate or coffee flavoured (so far as I can tell, anyway) and, in the absence of the former (je suis une chocolate fiend), I went for the latter for my first taste. Sadly, though, the coffee-flavoured crème pâtissière which filled the choux buns was more bitter than sweet and  the pastry wasn’t half as fresh or light as I’ve become accustomed to since moving here. I have actually had a disappointing éclair from the same place before (it seems savoury is more their forté than sweet) though, so I haven’t written off religieuses in general – I’ll just have to try one elsewhere. An excellent excuse, if ever one was needed.

Anyway, despite the let-down pastry, it was wonderful just to be able to sit out and enjoy lunch in the sun – and we continued to Make The Most Of It in a similar fashion once I’d finished work. This time, we met at Trocadéro – the opposite side of the Eiffel Tower to the Champs de Mars, where people always have their photo taken to look like they’re holding the Tower or whatever. A fun game up there, I have discovered, is to spot the photo shoot – there were all sorts of weird and wacky outfits and props to be found. After snapping a few pictures of our own, we flopped down on the grass with ice creams, no less, and sat for a while, enjoying the view and the general atmosphere of festivity. There were families, couples, and groups of friends dotted all around the little park, sharing picnics and bottles of wine or beer, the sounds of their mingled chatting and laughter, and music from someone’s small speakers, washing over everything. It was about as ‘summer’ as it’s possible to get, in April at least.

However, because it is only April – and early April at that (although I just realized it’s the 9th already, how did that happen?) – the air was cooling fairly quickly as the evening set in, so we sought refuge in the nearest ‘Frog’ pub (chain of English bars/restaurants and a bit of an expat haven) to have a couple of drinks with some visiting English friends.

Saturday was passed in an equally ‘summer’ fashion. We spent an hour or so ambling through the city on a winding route to the Jardin des Plantes, a large botanical garden in the 5th Arrondissement. Having heard that it was a great place to enjoy the Spring blossom in all its floral glory, we were a little disappointed to realise on arrival that we had actually come a bit early for more than a couple of trees to be in bloom. We resolved to return in a couple of weeks – but in the meantime, wandered around, enjoying the neat paths and sculpted flower beds, surrounded by beautiful, stately 18th–or–19th century buildings. We also got a couple of galettes (the classic jambon-fromage) by way of lunch – again, possibly the least appropriate choice possible for an afternoon which had by-passed ‘warm’ in favour of full-blown ‘hot’ – but a galette, or a crêpe, can never be a truly bad idea. They’re just too good.

2 thoughts on “A Taste Of Summer”